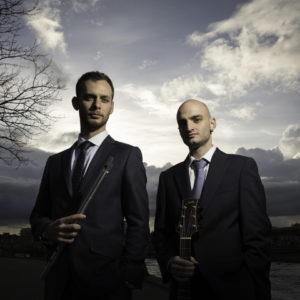 Event Horizon is a concept project devised by Géza Frank & Jean Damei at the centre of which stands a unique brand of music that fuses the group’s eclectic compositional styles with astrophysical and cosmological themes.
The aim is to create a new sort of music, inspired by traditional Irish & Scottish music as well as electronic dance music and film music, which is evocative and descriptive of phenomena discovered during humankind’s eternal quest for a better understanding of the Universe. The name of the project is derived from the outer fringe of black holes, the event horizon, which forms a theoretical point of no return, with such immense gravitational pull, even light cannot escape its forces. ​